Mixing day and night images with the technique in astrophotography known as ‘star trails’ it is possible to capture a single image detailing both day and night activity. In the photograph below to the left is the moon streaking across the scene and the lights of aircraft at night, to the right is the sun with traffic captured below. Depending on your location the technique can create some interesting timelapse single views photographs, below we detail how to create your own. 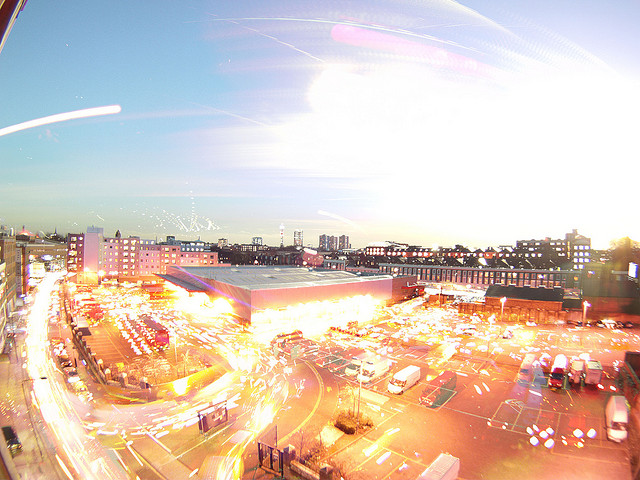 1 x Timelapse System, you can use a simple webcam as per our previous Tutorial: Torch + Webcam = HD Timelapse System a DSLR such as the Canon G9 with CHDK , a iPhone with the free Gorrilacam app or any camera that can take photos at regular intervals. We used a Go Pro HD camera in timelapse mode, taking a picture every 5 seconds.

1 x Copy of Photoshop, you can download a 30 day trial.
1 x Photoshop Stacking Action (thanks to Deep Space Astrophotography

The concept is simple, set up your camera, webcam or iphone at a suitable location, and capture an image at regular intervals, for our example we captured an image every 5 seconds pointing at the skyline of London. Capturing an image at least every 5 seconds is vital for star/aircraft trails as it allows for closer spacing between the lights in the final image.

We left the camera running for approximately 12 hours capturing 8000+ images, saved into a folder on our computer. Ours captured covered both day and night time, resulting in the following timelapse:

The next step is to open up photoshop, chose the images you want to use, and start stacking.


The images will be stacked onto of an intially blank image via a simple automated action:

1) Create a new blank black image the same size are your captured photographs.
2) Load the action into the action windows in Photoshop and load the action Startrails.atn. 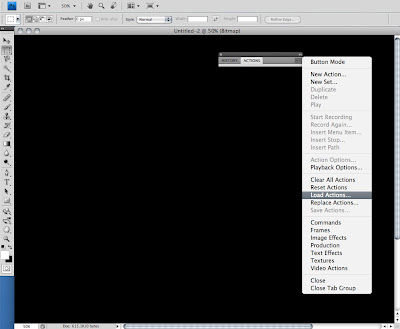 3) In Photoshop click ‘File’, ‘Automate’ and ‘Batch’. Select the action you have just loaded and choose your directory with the images as source and make sure you select ‘None’ for the output directory.
Click ‘Ok’ and leave it running, our Mac laptop took around an 2 hours to stack the images – resulting in the Star/Aircraft Trail’ below: 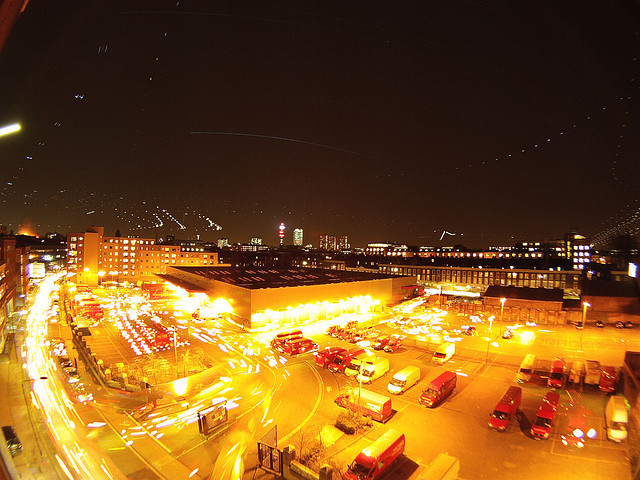 The line across the centre is a star and the bright line on the left is the moon coming into shot. The rest of the lights are aircraft in the sky above London. If you use a complete day/night sequence then you can create images of stars/activity in a blue sky, as in our first photograph.
You can view higher resolution versions via our Flickr Photostream.