A Science of Cities

Its taken a while but sometimes the wait is worth it. The latest blog out of CASA is written by its founder – Professor Mike Batty. Entitled ‘A Science of Cities‘ it is a site to bookmark as it is written by one of the leaders of the field. As Mike states – it has been a long time coming, but the Science of Cities is beginning. You can go back to the time of Newton to sense its origins and there is little doubt that Leonardo thought a little about how we might construe such a science. And if Leonardo knew about it, you can bet your bottom dollar that the Greeks had ideas about it. 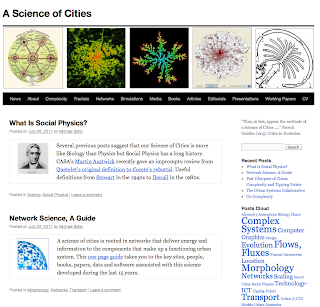 In fact one of Mikes favourite quotes is reproduced in the frontispiece of Jane Jacobs (1969) book The Economy of Cities (Random House, NY), and it is from Herodotus’s The Histories:

“I will tell the story as I go along of small cities no less than of great. Most of those that were great once are small today; and those that in my own lifetime have grown to greatness, were small enough in the old days”.
Head over to http://www.complexcity.info/  for posts, news and movies on the emerging Science of Cities.