Posted on Thursday 1 December 2011 by Andy Hudson-Smith
Core to GEMMA (our Geographical Engine for Mass Mapping Applications) is the OpenStreetMap feature highlighter. The feature highlighter allows users to search for any term and have it mapped with via points or original OpenStreetMap feature.
Ollie at CASA has used the feature to map the occurrences of the “High Street” road name – and a few regional variations, namely Main Street, Front Street, Market Street, Fore Street and The Street. Using GEMMA, and the high level of completion of OpenStreetMap in the UK and Ireland, allows us to visually show the spatial patterns of such street names: 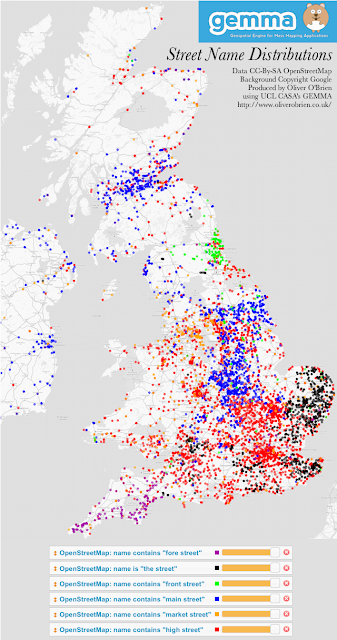 As Ollie states, it turns out that Main Street is popular in the Midlands and in Scotland and Ireland, and Front Street is popular in the North-East of England (around Newcastle) while High Street is used nearly everywhere in the UK – but only sparingly in Ireland. Market Street is popular in the Manchester and Devon areas. Fore Street is popular in Cornwall and The Street very popular in Essex and Kent.
GEMMA is in early beta, aimed at allowing anyone to create a map via its online interface and iPhone app, you can find out more and try it out via the GEMMA blog. We also provide a unique map url shortener, so you can share your maps with ease – the map above can be viewed live at http://gemma.casa.ucl.ac.uk/apps/canvas/?m=7tj
Thanks go to Ollie over at http://oliverobrien.co.uk/ for creating the map, let us know if you create a GEMMA map….