As Editor of Future Internet i am pleased to announce that Nathan Jurgenson of the University of Maryland has just published a new paper entitled ‘When Atoms Meet Bits: Social Media, the Mobile Web and Augmented Revolution’: 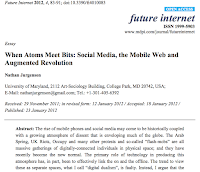 The rise of mobile phones and social media may come to be historically coupled with a growing atmosphere of dissent that is enveloping much of the globe. The Arab Spring, UK Riots, Occupy and many other protests and so-called “flash-mobs” are all massive gatherings of digitally-connected individuals in physical space; and they have recently become the new normal. The primary role of technology in producing this atmosphere has, in part, been to effectively link the on and the offline.


The trend to view these as separate spaces, what I call “digital dualism”, is faulty. Instead, I argue that the digital and physical enmesh to form an “augmented reality”. Linking the power of the digital–creating and disseminating networked information–with the power of the physical–occupying geographic space with flesh-and-blood bodies–is an important part of why we have this current flammable atmosphere of augmented revolution.


The full paper can be read over at Future Internet