Posted on Wednesday 21 March 2012 by Andy Hudson-Smith
As Editor of Future Internet (ISSN 1999-5903), an open access journal on Internet technologies and the information society, published by MDPI online we are pleased to announce the publication of the latest paper:


This paper describes the results of an analysis of the OpenStreetMap (OSM) database for the United Kingdom (UK) and Ireland (correct to April 2011). 15; 640 OSM ways (polygons and polylines), resulting in 316; 949 unique versions of these objects, were extracted and analysed from the OSM database for the UK and Ireland. 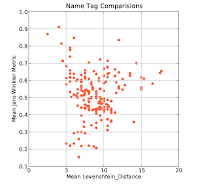 In our analysis we only considered “heavily edited” objects in OSM: objects which have been edited 15 or more times. Our results show that there is no strong relationship between increasing numbers of contributors to a given object and the number of tags (metadata) assigned to it. 87% of contributions/edits to these objects are performed by 11% of the total 4128 contributors.


In 79% of edits additional spatial data (nodes) are added to objects. The results in this paper do not attempt to evaluate the OSM data as good/poor quality but rather informs potential consumers of OSM data that the data itself is changing over time. In developing a better understanding of the characteristics of “heavily edited” objects there may be opportunities to use historical analysis in working towards quality indicators for OSM in the future.