The way we get around is changing. We increasingly combine bikes and transit. And in many cities we’re seeing a birth of whole new modes of transport like bike-share and carshare. Over at OpenPlans they build open source tools that are responsive to these changes and let us imagine new ways of moving and with the announcement of iOS version 6, Apple has dropped Google Maps and with it, previously built-in support for travel directions via public transit they are looking to kickstart a solution :

With support, OpenTripPlanner Mobile, an open source application developed by OpenPlans will put transit back on the iPhone.
The app will also add new features that Google Maps didn’t have, allowing users to combine walking, bikes, bike-share and transit together, finding the fastest and most efficient trips regardless of mode of transportation. 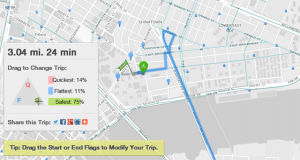 The people over at OpenPlans are a talented bunch, their New York Bike Share Trip Planner for example is nicely done. The more funds they raise the more features and data coverage they be able to add. We like the fact that all of the data and source code created as part of this project will be made  available for free as open source. Also, OpenPlans will release a developer API that allows you to access the back-end trip planner as a hosted service.

Open source tools to help make cities better, head over Transit App on KickStarter, at the time of writing they have raised $12,299 out of the $25,000 goal.