Raising Risk Awareness on the Adoption of Web 2.0 Technologies in Decision Making Processes

Future Internet has published the latest paper as part of the Special Issue Government 2.0 entitled Raising Risk Awareness on the Adoption of Web 2.0 Technologies in Decision Making Processes by Marco Prandini and Marco Ramilli of the Università di Bologna: 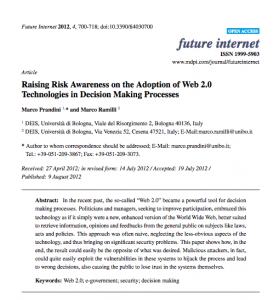 In the recent past, the so-called “Web 2.0” became a powerful tool for decision making processes. Politicians and managers, seeking to improve participation, embraced this technology as if it simply were a new, enhanced version of the World Wide Web, better suited to retrieve information, opinions and feedbacks from the general public on subjects like laws, acts and policies. This approach wa

s often naive, neglecting the less-obvious aspects of the technology, and thus bringing on significant security problems. This paper shows how, in the end, the result could easily be the opposite of what was desired. Malicious attackers, in fact, could quite easily exploit the vulnerabilities in these s

ystems to hijack the process and lead to wrong decisions, also causing the public to lose trust in the systems themselves.

You can view the full paper over on Future Internet.