So yesterday afternoon, just before I was about to go out to a meeting and then home, London Live contacted the CASA offices to see if someone was available to talk about a story appearing in Today’s Evening Standard about someone from an Estate Agents deciding that London had a new centre point!! Oh, and it was some bench on Victoria Embankment.

They wanted someone with a bit of spatial nous to come and talk at some ungodly hour this morning, about whether or not this really was the new centre of London. Sadly they contacted us too late in the day (plea to media people – 3.30 in the afternoon for something the morning after is not enough time given meetings and general living of life!) for anyone to appear, but had they have gotten to us a bit earlier in the day, this is what they would have got from me!

Short answer – NO IT`S BLOODY WELL NOT THE NEW CENTRE OF LONDON!!!

So in the article, apparently Knight Frank “using techniques developed by Army cartographers” (no less!!) have decided that the centre of London is at 51°30’37.6”N 0°06’56.3”W, and this, indeed, is on the Embankment just behind Somerset House, probably near the bench in question.

“But how the hell did these advanced Army techniques arrive at this location?” I hear you ask. Well, London Live sent us through the original press release from Knight Frank, which reveals their methodology. In their release is this picture: 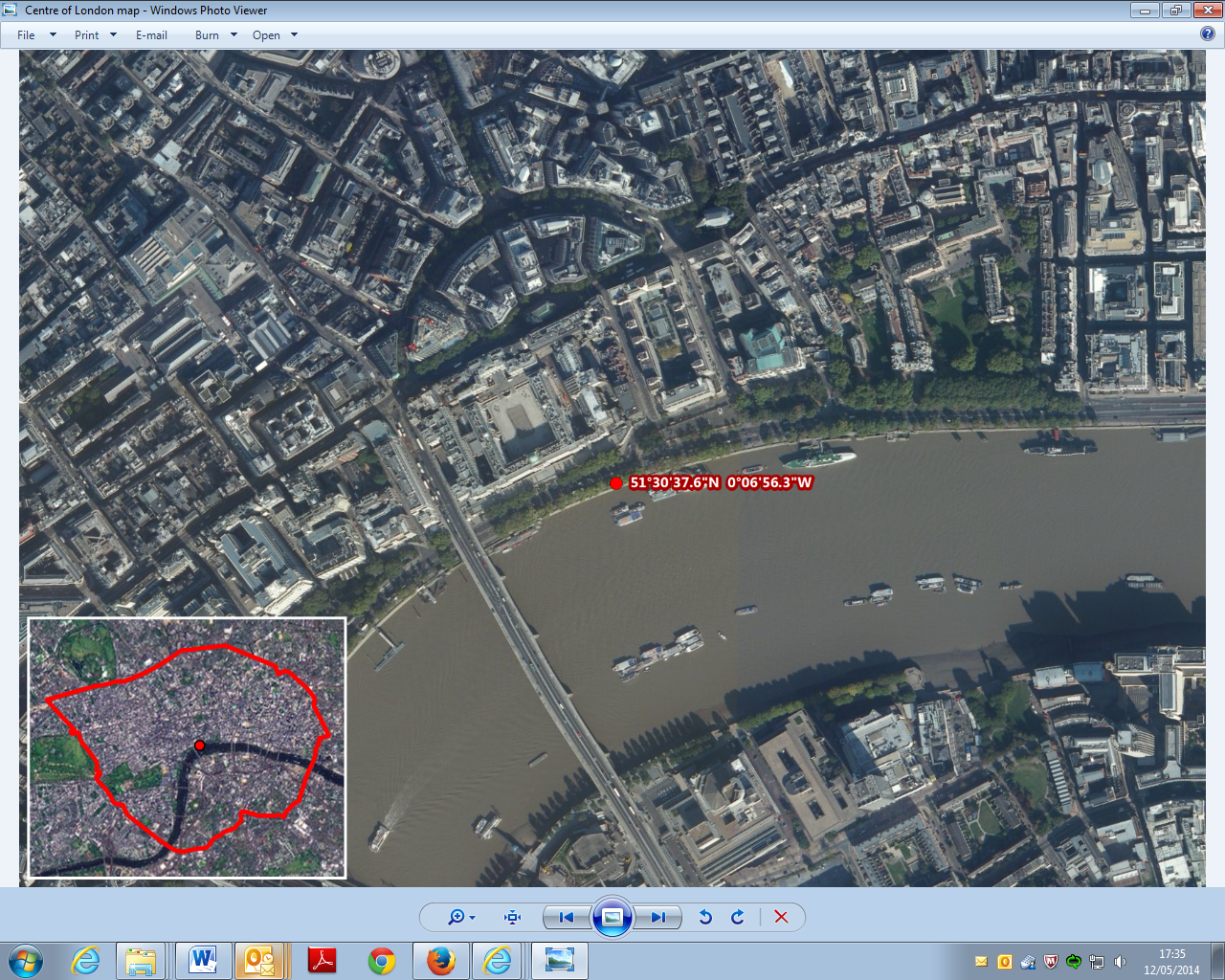 And next to the picture they explain that their calculation is in fact based upon ‘central London’s inner ring road’ (highlighted in red here). So in fact what Knight Frank have done is create a polygon from the central ring road, take the geometric centroid of that polygon and then decide that this is the new centre of London!

Excuse me while I let out a little WTF?!

OK, so the new centre of London is now based on one tiny bit of the central London road network, not the rest of the road network, or the M25 or on any of the other features of the city such as its population or its built up area, or the boundaries of its boroughs or anything like that, just one little section of road? Yes.

I can be sure this is what they’ve done because I have been able to use the same advanced Army mapping techniques (which are remarkably similar to the basic undergraduate GIS techniques I am also familiar with) to reproduce their work: 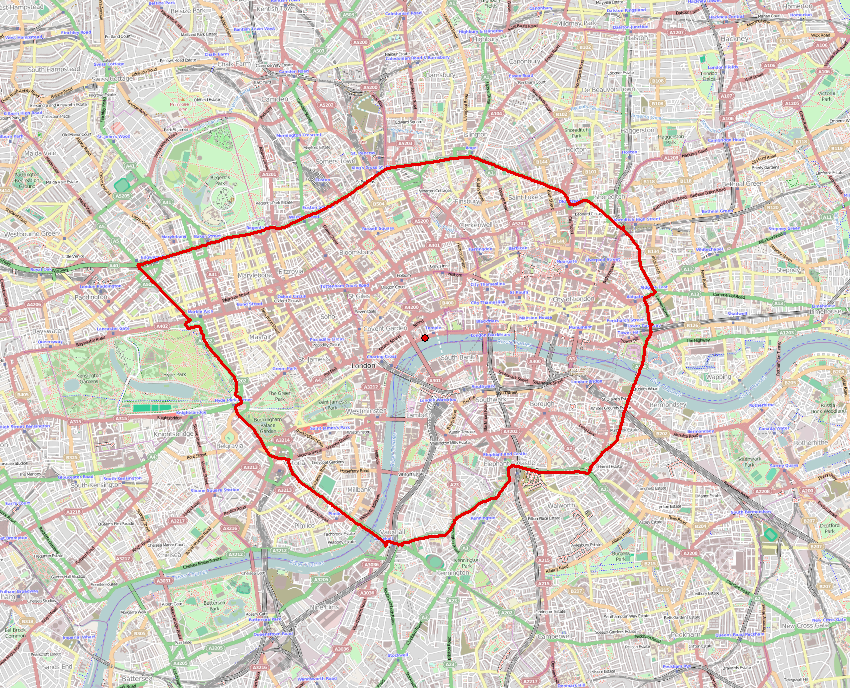 Here I took some data from Open Street Map on the central London road network, filtered by ‘Trunk Roads’ and selected the central ring road bit I was interested in. Converting this road segment into a polygon (quite easy using the ‘dissolve’ feature in ArcGIS) I could then calculate the geometric centroid of the shape – hey presto the new centre of London!!

Or not. Now I don’t know about you, but I’m not too happy with defining the centre of a massive city like London just by some arbitrarily chosen section of road, that just happens to be sort of circular and sort of in the middle. I think we can be a little more sophisticated with our advanced army techniques!!

What about if we argue that the extent of London is actually all of the Boroughs (and the City of London) that make up the Greater London area? What if we use our army calculation machine (otherwise known as basic maths – seriously, try it here with a triangle) to work out the geometric centroid of the London Boroughs? Surely this would be better?

But what if geometric centroids aren’t the best way of measuring the centre of gravity of a place. I mean, sure, they are great for shapes, but London is a bit more than a shape. It’s a city full of people. Are London’s people not important in all of this? Fortunately there are things we can do to take account of London’s people when trying to define a true centre – something that our army friends in all their wisdom failed to explain to Knight Frank!

Us geographers quite often use things call ‘Population Weighted Centroids’ – these take account of where people actually live in an area, and shift the geometric centroid accordingly.

Results from the 2011 Census (probably best estimate of London’s population distribute we have) are released for zones of around 300 people called Output Areas. The Office for National Statistics has very kindly calculated a whole set of population weighted centroids for these areas across England and Wales. What I have done here then, is calculate the mean centre of all of the population weighted centroids for all of the output areas in all of the London Boroughs. Do we get a different centre of London? You bet!! 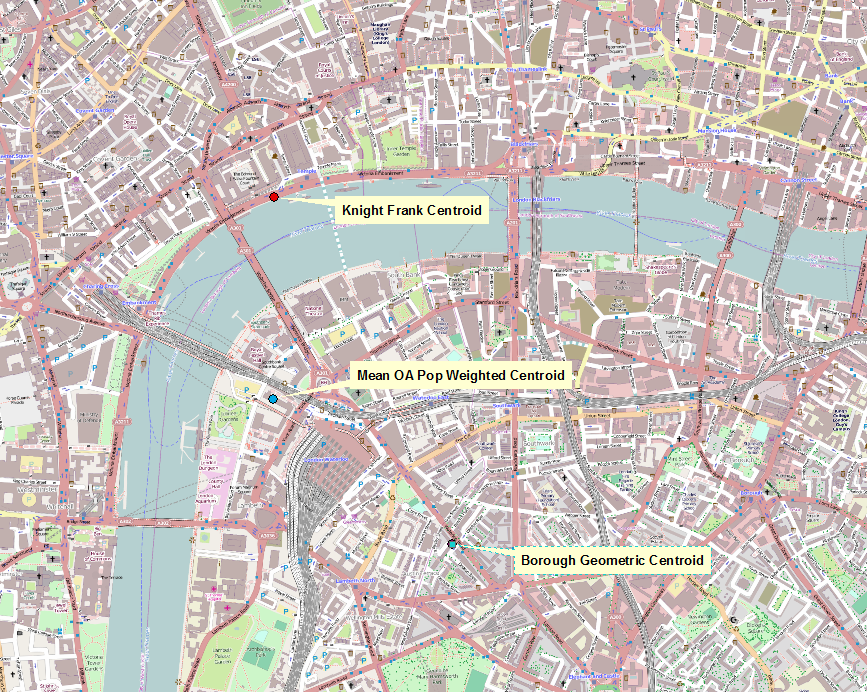 So as you can see, if we take population into account the centre of London moves yet again and can this time be found somewhere in the Shell Centre just off the entrance ramp to Waterloo Bridge.

Now I could go on – essentially there are any number of ways that we can calculate the centre of London (I could go into the London Travel to Work area, the extent of the Oyster Card zone, the postcodes we use in London, the built up area, but I won’t – for every definition of London Ollie O’Brien talks about in his discussion of ‘Where is London?’, we could define a new centre quite easily), but I would argue that the Knight Frank Centre, being as it is just based upon the geometric centroid of some arbitrary bit of circular road, is certainly NOT the centre of London.

It’s also worth noting that, in case you’d not guessed from my tone, these are not techniques developed by army cartographers, these are basic techniques that anyone who studies an undergraduate geography degree in the UK will learn. And as an undergraduate geography student will be able to tell you, drawing a map or creating a centroid from a polygon is easy once you’ve been shown how – thinking about what you are showing and justifying the decisions you make is the hard bit!

Since I originally wrote the little rant above, I’ve been in contact with Ian McGuinness at Knight Frank who did the original analysis (pre the Chinese-Whisper-Mill that can be the press office, the journalist, the editor, the TV report off the back of the story) – he was understandably a little put out by the tone of the piece above, and this made me realise that perhaps the direction of my ire was not as clear as I though as I thought when writing the blog.

Just to be clear, my beef is with the press hanging on the ‘army techniques’ thing and using this as a lever in the old argument from authority ploy to assert that this is categorically the new centre of London. No Evening Standard and London Live, this is not the new centre of London, this is just one of a number of possible centres of the city which could be defined in a whole range of different ways, depending on what you think is the most important feature of the city. Implying that ‘this is’ rather than ‘this could be’ the new centre by invoking the technical prowess and accuracy of the army is bad form and something that will rattle the cages of academics all day long!

The techniques are standard, the results are subjective, but of course this doesn’t make for a good news story! I know that the headline – “One of many new alternative centres to London proposed” is not as catchy as “London’s real centre point is next to bench on the Victoria Embankment by the Thames” but if you had maybe waited a day before running with the story, I would have been available then to explain this on your TV show!